F.H. Paschen celebrated the opening of the North Terminal and the 95th Street Pedestrian Bridge of the Chicago Transit Authority (CTA) 95th Street Red Line Station Improvement Project alongside joint venture partner Milhouse Engineering & Construction. A skilled, diverse workforce of over 1200 executed this work, including residents from the local community who will enjoy access to the improved station regularly.

Paschen Milhouse Joint Venture IV on the 95th Street Station Improvement exemplifies Paschen’s continued effective partnership with Milhouse, teaming their staff’s complementary experience and skills to execute this challenging design–build transit project.  Milhouse has been an integral part of both the construction and design engineering teams.

Committed to growth and building capacity in diverse and local businesses, Paschen and Milhouse have awarded over 30 percent of this project’s subcontracts to disadvantaged businesses. 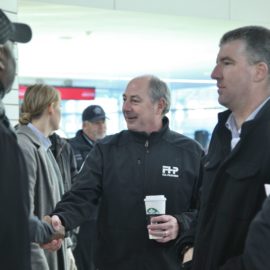 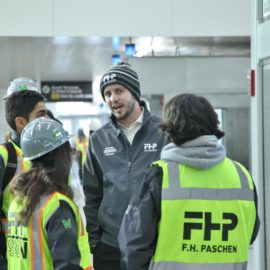 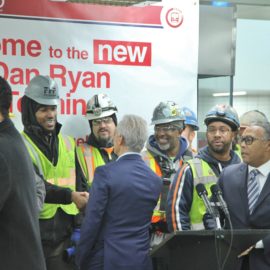 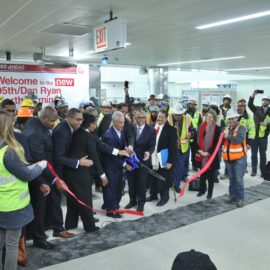 Parents and students gather at GWCP for F.H. Paschen’s P.I.E. – Paschen’s Innovations in Engineering – event for a night of information, engineering challenges, and pie! Students at George Westinghouse College Prep, along with parents and faculty, attended the 5th annual P.I.E, Paschen: Innovations in Engineering, event on Thursday, February 27. F.H. Paschen hosted the event at Westinghouse College Prep as an introduction to their Paschen Engineering Scholars Program as well as the field of engineering for interested candidates. The ...

Students at Westinghouse College Prep who are in the Paschen Engineering Scholars Program visited two active job sites managed by the Scholars’ program sponsor F.H. Paschen. Their first stop was at Midway International Airport, where construction is underway on the new 80,000SF Security Checkpoint Bridge. Following a tour of the job site, the Scholars met with our Virtual Design and Construction team stationed at the Midway job site office and examined BIM and 4D Models with our technical staff. After ...

A Construction Story: An Evening of Powerful Discussion and Opportunity

On Tuesday, December 10, F.H. Paschen invited members from 3 local social impact organizations to a holiday event filled with powerful discussions, a drive for empowerment, and a delicious meal. The discussion included participants from Chicago CRED, Safer Foundation and Revolution Workshop and highlighted future opportunities for career networking events and industry seminars to start them down the path for a career in construction. F.H. Paschen led the conversation on what the path to success looks like. “We’re not just ...

Paschen Doubles Down on Building Capacity for Women, Diverse, Small and Veteran-Owned Businesses

The commitment to building capacity for women, diverse, small and veteran-owned businesses was instituted by Bud Paschen over 30 years ago. Bud recognized that by collaborating with these businesses and communities he was not only growing their business, but Paschen’s as well. Paschen’s consistent and meaningful engagement has led to the contracting of over 200 diverse subcontractors in 2018.  In September alone, Paschen attended and/or hosted 10 outreach events for diverse businesses. Outreach events allow our team to meet and educate new diverse businesses on how to do work with us and the ...